All too often the leadership of #Plaid are the dross of #Wales unable to find a political home anywhere else & just read the output of most of the #Nationalist & #Welsh_language activists they are toxic & do great damage to Wales & the #Welsh they are the region’s worst enemies!

Andrew RT DaviesVerified account@AndrewRTDavies
Disgusting post from someone who should know better. The swastika represents a regime that slaughtered over 6 million people. Insinuating 52% of your fellow citizens are ‘nazis’ is beyond the pale. I hope @Adamprice distances his party from this. https://www.dailymail.co.uk/news/article-7081711/Former-Plaid-Cymru-leader-accused-comparing-Brexiteers-NAZIS.html…
Do be minded that in the 1999 European Parliamentary elections, Plaid Cymru got 185,235 and a 29.6% share of the vote.
After 20 years of having a Regional Assembly & closer attention of the % of vile extremist supporters Plaid, nationalism & Welsh language extremist supporters have support for these knuckle dragging abusive ingrates has collapse by 1/3rd. the result being that in 2019, they got 163,928 and a 19.6% share of the vote!
Consider the collapse nationalism has prezided over with S4C’s audience for Welsh language programs rarely being over 30,000 & many programs having a statistical audience of zero (under 10,000) whilst Radio Wales is experiencing the worst audiences in its 40 year history. All largely due to the manipulation of job placement by the crachach and their corrupt bretheren appointing family & friend rather than the best person for the job.
Broadcasting, be it TV or radio, in Wales has become parochial, crass and amateur and is losing its audience – similarly there is no longer a single Welsh owned newspaper of any merit and to stand any hope of serious employment in the media anyone of competence now has to prostitute themselves to the crachach.
These irresponsible & divisive extremists are not only their own worst enemy – which is in many ways helpfull – but sadly they are Wales’ worst enemy & have done immense damage to Wales & the Welsh, not just in the resultant trashing of education in Wales but of the NHS, infrastructure, jobs, inward investment & regional self respect – decent Welsh residents are not just embarrassed with their actions but downright ashamed.
The region has become more divided than ever before in its history & it is clear this toxic element are in some way genetic as in all of the history of Wales it has only ever come together as supposedly a nation for 8 years about 1,000 years ago and that was only due to one of the barbaric leaders of the disperate tribes managing to murder all his rivals!
The tragedy of Wales would seem to be that throughout history so called nationalism & the Welsh language have been used to underpin division and hatred, corruption and a toxic underclass cynically manipulated to keep a self proclaimed elite in control and we can all see the division amongst these two groups nowadays with the crachach manipulating their moronic minnions, whilst appointing themselves and their families & chums to all the positions seen to be of authority – whether they have ability or not.
To give themselves courage in this farce the moronic minions form themselves into a small and insignificant gang of foul mouthed abusers on social media seeking to impress eachother – whilst talking in this bubble they little realise that yet again they are damaging their cause – just as Leanne Wood has further damaged Plaid & the cause with her utterly irresponsible recent Tweet.
They are like a marauding gang of bullies acting out their fantasies in a playground to impress eachother whilst being ignored or reviled by the more experienced and better travelled around them.
In the main this behaviour has been catastrophic for Wales & the Welsh just look at the collapse of Plaid in the last 20 years – the fact that on its present course they have signed the death knell of the Welsh language  with compulsion and weaponsising the language, following down the well worn track of The Gaellic in Scotland, the Irish language & more recently Afrikaans in South Africa which led to the SOWETO riots of 1976 and the fall of apartheid Government, land seizures and ‘plas morte’.
Plaid, nationalism & enforcement of the tiny minority Welsh language are playing a very dangerous game – one they will inevitably loose as shown by all the statistics throughout history.
For more details of this problem for those genuinly interested in the wellbeing of Wales & the Welsh, rather than the all too prevalent incestuous navel gazing and abuse, I suggest you start out by reading CLICK HERE maybe also HERE

Wales’ former top politician has come under fire for likening Brexiteers to Nazis in an astonishing Facebook post she defiantly praised as a ‘powerful image’.

Leanne Wood – the former leader of Plaid Cymru who wants Welsh independence – shared a controversial cartoon that showed a figure cloaked in an EU flag arm wrestling with a swastika over a ballot box.

She posted the sketch on social media as the European Parliament election results came in.

But her followers were quick to slam the post as ‘idiotic’, ‘childish’ and ‘totally inappropriate’ – and urged the politician to delete it.

Leanne Wood served as the leader of Plaid Cymru between March 2012 and September 2018. 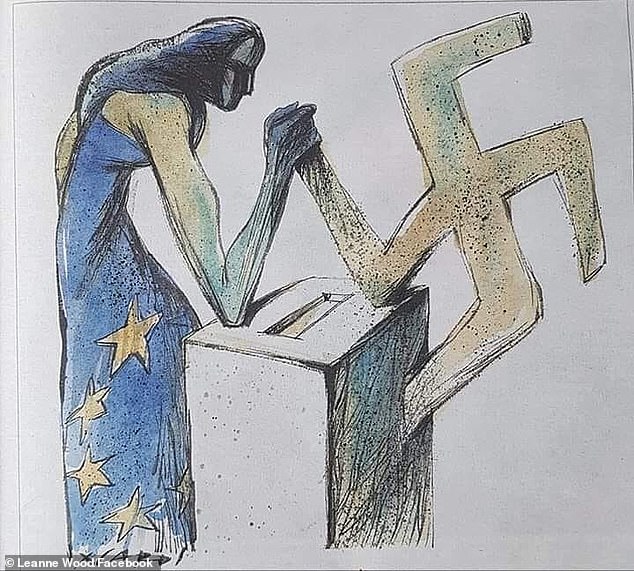 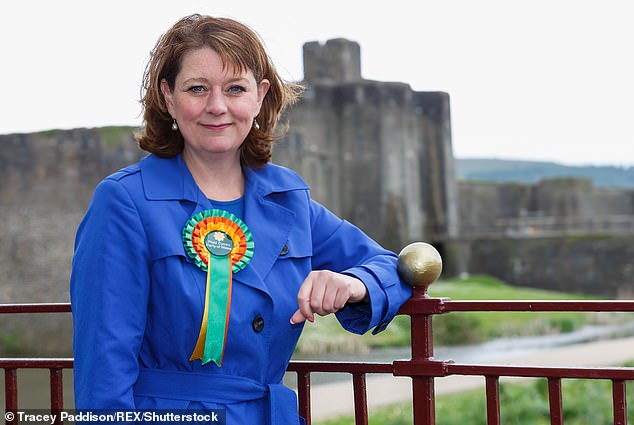 She was the first female leader of the party and continues to work as a member of the National Assembly (AM) for Rhondda.

Defending the criticism surrounding her cartoon, the staunch Remainer wrote: ‘Some very interesting and varied responses to this image. Powerful image, isn’t it? For anyone who is interested in my interpretation, I see it as a comment on the battle of values that we are engaged in.

‘Pro European, outward looking, progressive, promoting of equality versus the parties of the far right across the EU which are expected to do very well tonight.’

But many refused to accept her explanation.

Michelle Evans wrote: ‘What an idiotic post. I’m actually a Remainer but this is just offensive.

‘People are entitled to their opinion and just because it differs to yours doesn’t make them a Nazi.

‘The only thing this post achieves is ensuring a lot of people don’t vote Plaid again.’

‘I am a massive Remainer and my country voted massively to remain as opposed to England and Wales.

‘This post is not constructive at all and tags everyone who voted leave as a ‘Nazi’ which is not right.

‘What use is that to building common ground. Please delete.’

Laura Scarrott said: ‘I find it a bit worrying that the Swastika is being casually used in any picture, to be honest.’

‘There are so many hardworking everyday people who support Brexit, people who are as far away from Nazism as can be.

‘People who just want the best for their communities, and this is how the left is portraying them?’

And Mark Taylor vehemently ranted: ‘Seriously? Using a Swastika to depict anybody that isnt PRO-EU?

‘You have some serious mental issues.

‘I’m a valley boy born and bred from one of the most devastated towns in Blaneau Gwent, where 60+ per cent voted to leave the EU.

‘Doesn’t that tell you that there is something drastically wrong with your beloved paymasters?

‘Instead of looking after your own interests, ask yourself why such a high percentage voted to leave.’

Andrew Goodwill said: ‘You really are not fit to be a politician.’

Meanwhile, Stuart Brown said: ‘Shocking childish pic from someone who is representing Wales.’

Not all the responses were negative, with some expressing their support for the politician.

A spokesperson for Leanne Wood AM said: ‘Leanne shared the cartoon because she sees it as a comment on the battle of values that face many countries in Europe.

‘On the one hand there is a Pro-European, outward looking, progressive, promoting of equality versus the parties of the far right across the EU which have been on the rise.

‘Just look at the results over the weekend in Italy and France to see the dangers that exist.

‘Leanne is determined to keep on drawing attention to the rise of the far right across Europe due to the severe dangers it poses for society and equality.’